In March 2000, the City purchased a 54-acre parcel located north of Miramar Parkway, east of Red Road, west of Hiatus Road and south of Miramar Boulevard. It then proceeded to acquire all of the necessary development entitlements for the property’s development into a vibrant mixed-use Town Center that would house the new City Hall facilities, a public library, cultural center – arts park and educational center in the civic complex area. The project is also programmed to contain retail, office and residential components.

Development
Once all necessary entitlements were acquired, the City developed a Master Plan and a Pattern Book to guide the development of the project. In December 2002, the City broke ground on the Town Center project and vertical construction of the new 87,000 square foot City Hall facility began in May 2003. City Hall reached substantial completion in August 2004 and a phased move-in commenced shortly thereafter. The City Hall Grand Opening Celebration was held in December 2004 with over 8,000 people in attendance. 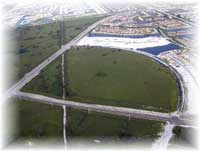