The City of Miramar is conveniently located in the center of South Florida between Broward and Miami-Dade Counties. It stretches from the Everglades in the west to State Road 7 in the east. Miami-Dade County is on the southern border.

The City of Miramar has experienced tremendous economic and community growth and development over the past several years. The City has become home to more Fortune 500 companies than any other city in South Florida. Florida is a multicultural region that is recognized for its tropical climate, beaches and other tourist attractions and its retirement population.

City Location
Miramar’s strategic location provides excellent accessibility to the region’s major transportation corridors, international airports, and seaports. The four major corridors that traverse the City include Florida’s Turnpike, Interstate 75, U.S. 441/State Road 7 and U.S. 27. In addition, Interstate 95, Interstate 595, and State Road 826 are in close proximity. These corridors provide a 20 minute commute to both Miami and Ft. Lauderdale/Hollywood International Airports and their respective downtown areas and seaports.
Town Center Project Location
The Miramar Town Center is located in the heart of the City; north of Miramar Parkway, east of Red Road, west of Hiatus Road and south of Miramar Boulevard. This prominent location provides easy access to the aforementioned major transportation corridors, including Interstate 75 to the west and the Florida Turnpike Extension to the south. 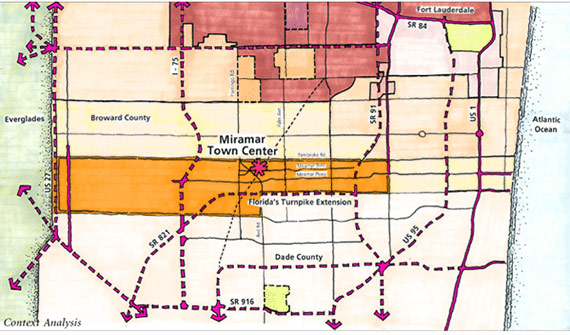 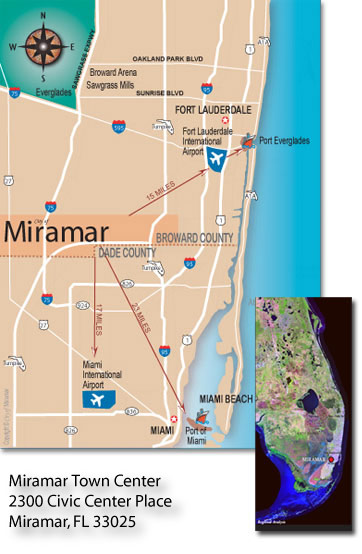